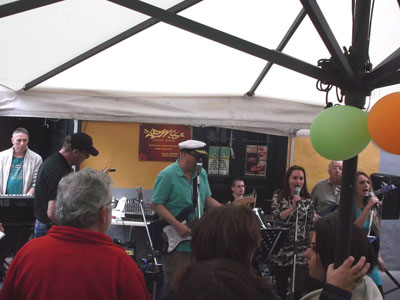 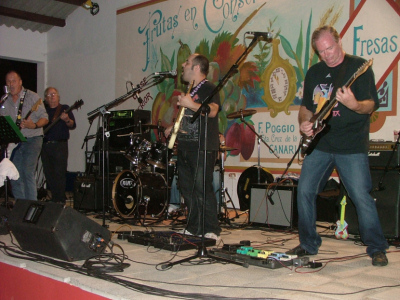 and the homepages of   MANIFOLD   Rock n'roll band extraordinaire 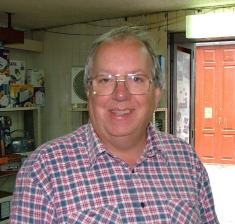 Whilst navigating through the murky depths of cyberspace, you have stumbled across the web pages of Ellis John Mills.

Born in Camberwell, SE London in 1947... Moved in 1986 to the island of La Palma in the Canary Islands to work as an electronics technician at a world class observatory and retired at the relatively young age of 55 due to company restructuring and the world recession!

I build my first website in 1996 which was hosted on the observatory's MicroVAX computer, but lost the account (and the data!) when I was heaved out of the company in 2002. So I had to start again and finally got this new site up and running in 2005. I redesigned it basically as three web sites rolled into one with the pages reflecting my interests and hobbies over the last 50 years or so. Principally astronomy, but also playing the bass in a local rock band and amateur (ham) radio.

This is a good old fashioned no nonsense website edited in the time honoured way. I gave up using MS Frontpage! Trust you enjoy your visit... :-)

Astronomy without doubt has been my longest interest... Well, it must be as I was only about 7 years old when I started looking up at the night sky! In later years it also became a part of my job when I fulfilled my childhood wish of working for the Royal Greenwich Observatory. However, not in the UK but at their new observing site (Isaac Newton Group of Telescopes) high above the clouds (most of the time) at the Observatorio del Roque de Los Muchachos (ORM) on the island of La Palma in the Canary Islands.

Click on the comet to enter my ASTRONOMY pages to see how I got into this fascinating pastime and an overview of what its like to work at a world class observatory.

Living as a teenager in London in 'The Swinging 60's', one could hardly not get caught up in the music scene at the time. So started my rise to superstardom... Well, not quite :-)

Read my sometimes amusing story of what it was like playing in semi-pro bands in those days and the ONLY photo of me from those times when I played in THE SHAPES and how many years later, I started playing again with some mates from work forming the rock band MANIFOLD on La Palma.

Click on me bashing the bass to enter my UK MUSIC PAGE and the home pages for MANIFOLD.

From an early age I have always been interested in things electrical and have followed a life long career in electronics. In 1969 this lead me into the hobby of amateur (ham) radio.

Read how I got started and in 1975 met up with a group of guys over the air (who I still have regular contacts with) and so formed the Coulsdon Contest Group (KKC). A group of radio nuts dedicated more to throwing down large quantities of real ale than out to win transmitting contests, hehe :-)

Click on me on the radio in 1983 to enter my RADIO and KKC pages.


This is a non profit making website and as such none of the material within is copyrighted. All the photos were taken by me except where stated.
All I ask is if you can please acknowledge me: E.J. Mills (or whoever took the photo) if you wish to use any of the images. I am always pleased to
receive comments or answer questions regarding this website and can be contacted at: ejmills [at] millseyspages [dot] com

Due to Telefonica (Spain) discontinuing personal webpage space and domain hosting on their servers, this website has now moved to Acens
with considerably more disc space (now 5Gbs) for my website.